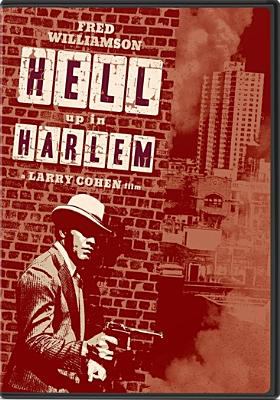 Format: DVD
Edition: Widescreen edition.
Description: 1 videodisc (approximately 95 min.) : sound, color ; 4 3/4 in.
Recovering from an onslaught of bullets that would have killed a lesser man, Tommy Gibbs is out for revenge against DiAngelo, a sleazy New York District Attorney with mob ties who set up the hit-gone-wrong. Tommy, with the aid of his father, Papa Gibbs is soon on the mend and putting his Harlem empire back on track. But there's a catch. Could Tommy's near-death experience have changed the man who was once called the 'Overlord of the Underworld?'
Other Authors:
Williamson, Fred.
Harris, Julius W.
Hendry, Gloria, 1949-
Avery, Margaret.
Martin, D'Urville.
King, Tony.
Gordon, Gerald.
Ramsen, Bobby.

Hell Up in Harlem.