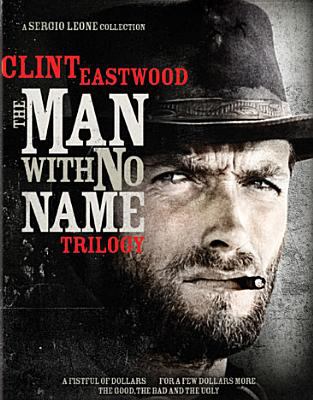 Format: Blu-ray Disc
Edition: Widescreen ed.
Description: 3 videodiscs (ca. 409 min.) : sd., col. ; 4 3/4 in.
The Sergio Leone ‘spaghetti westerns’ did not simply add a new chapter to the genre, they reinvented it. From his shockingly violent and stylized breakthrough, A Fistful Of Dollars, to the film Quentin Tarantino calls ‘the best-directed movie of all time,’ The Good, The Bad and The Ugly, Leone’s vision elevated Westerns to an entirely new art form. The definitive Leone collection of the most ambitious and influential Westerns ever made includes over five hours of special features.
Other Authors:
Eastwood, Clint
Wallach, Eli
Van Cleef, Lee
Volonte, Gian Maria

The Man With No Name Trilogy