Pysanka is the best-known artifact of Ukrainian folk art. Local artists Yevheniia Bazaliy and Svitlana Tsyganok show you how to make these beautiful, traditionally decorated eggs.

Spring has Sprung, and you may be thinking a lot about eggs this weekend - hiding them, cooking them, maybe even decorating them. Local artist, Yevheniia Bazaliy, describes a beautiful Ukrainian folk art technique that has passed down over hundreds of years.

In 2013, archeological diggings in the city of Lviv revealed a five hundred years old pysanka made on a goose egg. It is quite clear that Pysanka was a ritual object, involved in numerous seasonal festivities and folk traditions. This role was assumed long ago, in pagan times, and the tradition was preserved after the adoption of Christianity. Pysanka remained associated with magic and, by extension, became the embodiment of faith.

Our ancestors expected that the right symbols would promote good crops and save entire families during the hunger and hardships of the coming winter. It is also known that young men and women exchanged pysankas with code symbols painted on them to pass secret messages and avoid the supervision of the family. With the advent of Christianity Pysanka painting became an Easter tradition. The symbols acquired a religious meaning. 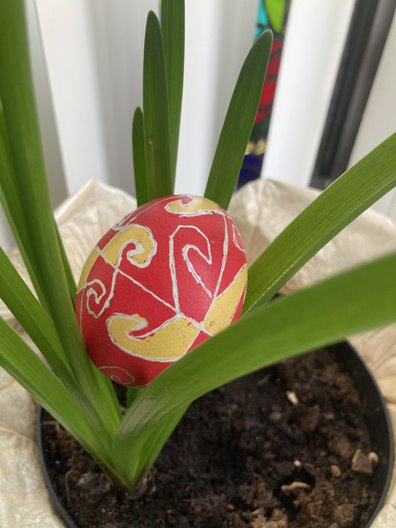 The South is getting a taste of Pysanka as well. Many artists promote this ancient art in their communities. In Columbia, Pysanka workshops are attended by individuals, families with children, people of different walks of life and ethnic backgrounds.The classes continue throughout the whole year, not being restricted to the Easter season. They are hosted by the Columbia Art Center that works to popularize the cultures of the World in South Carolina. The first presentation of Pysanka in Columbia happened in 2018 at the Ukrainian Food and Tradition Festival organized by Maria Khorun. The festival featured a children's Pysanka workshop for elementary school kids. Every participant got a blown-out egg ready to be colored, the pysachok, and a working area with a candle. The emotional response of the kids was overwhelming. Also supported by the Columbia Museum of Art, the Pysanka eggs are presented and sold in the gift shop.

In an effort to preserve and support the Ukrainian Community and its rich culture, artist Yevheniia Bazaliy and her student Svitlana Tsyganok applied for and received a grant from the South Carolina Arts Commission to share this egg painting technique with the South Carolina community.

Enjoy this video, created by Yevheniia and

Svitlana, as the artists take you through the process of this beautiful ancient folk art technique.