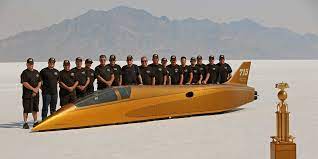 Picture of the race car, that set the 466.290 mph speed with the crew members.

I visited this summer the Bonneville Salt Flats in Utah, where a driver achieved the highest land speed on Earth with an automobile.

Driving is permitted on the salt flats. The Bonneville Salt Flats is administered by the Bureau of Land Management for public use and enjoyment. There are sometimes closures when the salt is moist or there's standing water on the surface. Signs will be posted. Visitors should only go to the salt when the flats are completely dry. When it is wet or flooded from precipitation you can easily damage the salt crust and become stuck in the underlying mud. Try to stay at least 100 yards of the edge of the salt crust or you may get stuck in the underlying mud. A highway runs by the salt flats and salty lakes and there is a scenic outlook with a large parking area and interpretive signs. It is a starkly beautiful place, a vast expanse of white surface that looks like snow and dramatic, sparsely vegetated mountains as a backdrop. One can walk onto the salt flats from here but for access by vehicles there is a causeway leading deep into the salt flat from the dead end of which it is safer to ride off onto the surface of salt.

If you want to feel what is like to ride on the vast expanse of the perfectly smooth surface salt flat try it. I think it is really fun. If you drive on salt, it can get on your car and the salt will cause corrosion. So, it is advisable to wash it off with fresh water as soon as possible.

Each winter there is a shallow layer of standing water on the salt flats. During spring and summer, the water slowly evaporates, leaving interesting crests of salt, and eventually the wind smooths the surface making it perfectly flat. The salt flats are about 12 miles (19 km) long and 5 miles (8 km) wide, with a crust almost 5 ft (1.5 m) thick at the center and less than one inch (2.5 cm) towards the edges. It is estimated to hold 147 million tons of salt, approximately 90% of which is common table salt (sodium chloride).

There is no speed limit on the vast flats and no likelihood of a collision. It is because nothing obstructs your vision. This is why people like to drive on it. Amateur drivers and racers try their maneuvering and drifting skills and we saw interesting, almost artistic rubber marks on the salt flat. I myself was afraid to drive too fast on it for fear of rolling over.

Except for dark and rain, there is a limit to visibility for normal distances but for an interesting reason there is a limit to visibility. It is the curvature of the Earth! (Earth is not flat as we know well.) The 7-mile ‘track’ on which they regularly clock the speed is long enough that the finish line is not visible to the driver at the start because the end of the track is actually below the horizon.

Thirty years ago, Karl Benz built an automobile. Teddy Tetzlaff drove a Blitzen Benz racecar and drove across the Bonneville Salt Flats. He set a 142.8 miles per hour speed back then. This was an unofficial land-speed record.

Of course, people wanted to achieve a higher speed on the Bonneville Salt Flats. The latest one was George Poteet, who on August 13, 2021, after my visit, set a new record for fastest piston-powered, wheel-driven land speed racing in his single-engine BFS (blown fuel streamliner) Speed Demon vehicle.

The Speed Demon's fastest speed was 466.290 mph and was achieved with a turbocharged 443ci, LS-based engine built by Duttweiler Performance. This is the 10th time Speed Demon has posted the top speed of the SCTA's Speed Week at the Bonneville Salt Flats in Wendover.

The salt flats provide not just a setting higher and higher speed limit for cars. It is an important nesting habitat for endangered bird species: Snowy Plovers and American Avocets. The salt flats may seem superficially lifeless but there is a rich microbial flora. As scientific report summarizes it: “Robust Archaeal and Bacterial Communities Inhabit Shallow Subsurface Sediments of the Bonneville Salt Flats”, many of which are photosynthetic organisms and provide food higher levels for an ecosystem food chain. There are shallow pools of water in which salt tolerant microbes, cyanobacteria and algae thrive on which thousands of invertebrates feed, and which in turn themselves are important food sources for nesting Snowy Plovers and other shorebirds.

During my visit cyanobacteria were visible on the surface here and there as blue and violet stains, and where the crust was broken, and the mud was exposed, the wet mud surface was covered by green algae or microorganisms. Very few flowering plants can tolerate such a very salty environment and indeed no flowers grow where there is salt crust, but just a few inches above the salt crust level (which is close to 0 m above sea level), one type of plant was growing in the shoulder of the asphalt road over the salt flat, just a few feet away from the salt flat. Two species of pickleweed, also called glasswort and samphire (Salicornia genus), grow here. They have tiny flowers pollinated by the wind, and their oil rich seeds are also food for wildlife, the shorebirds.

I definitely recommend to visit that place for its uniqueness. 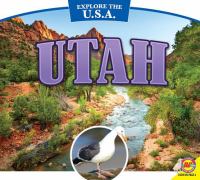